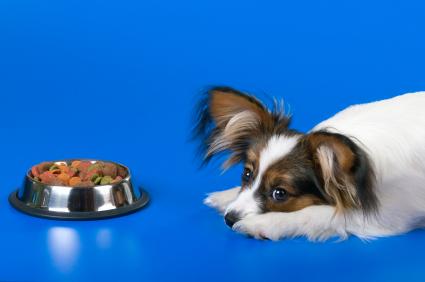 Feeding issues with pets can be frustrating and upsetting. When an animal refuses to eat, it can be challenging and worrying for parents because they know that a pet needs to eat to survive. When our dog, Bandit refused to eat, we thought he was not happy with his food. For many years we would struggle with his feeding and he would never eat ravenously. He would always just pick at his food and make a mess. For a medium sized dog – he weighs 21 pounds, we knew he should be eating more than he did.

Frustrated by his eating habits, we switched his food many times over the years. Unfortunately, he never seemed to enjoy eating. He loved treats and eating off the floor, but he never ever liked to eat out of his bowl. We were finally at a point where we thought his health might be in jeopardy. We took him to the vet and the vet said he would eat when he is hungry enough and not to do anything differently. Unfortunately, Bandit developed kidney stones and needed surgery to remove them. After surgery, the vet recommended that we feed Bandit a special urinary health diet. This meant changing his food again.

We were so frustrated and worried that he wouldn’t eat, we started putting his food right on the floor. We felt it was unsanitary but it was the only way he would eat his new food. For a while we used a paper plate, but it moved all over the floor and looked terrible with our decor. Eventually, we used plastic lid from a cookie tin. Bandit seemed to like eating from the lid and it was more sanitary than eating off the floor.

We had the idea to develop a dish that closely resembled eating off the floor. The Pet Plate was born and Bandit has had a sanitary, visually appealing feeding system that he is finally happy with.

The Debate to Elevate the Plate